The Pay-TV Industry is Benefiting from Subscribers’ Inertia 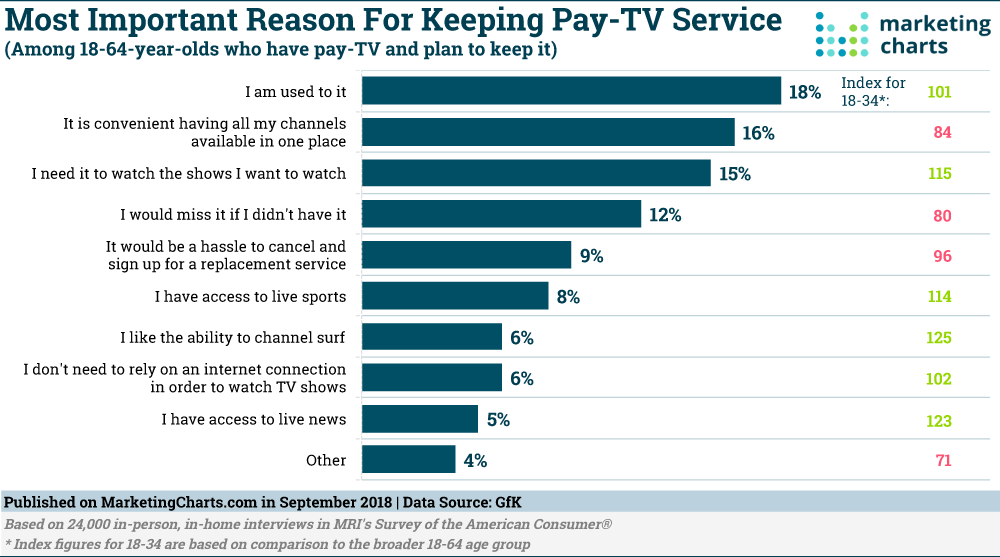 Cord-cutting is a big story these days – and rightly so. That makes it rare to hear about people who are “loyal” to the cord. But in a new report, GfK provides a reminder that fully 71% of all US consumers not only have a pay-TV service but also have no plans to drop it.

But there are certainly signs of trouble. The 71% of adults who qualify as so-called “cord-loyalists” is down from 77% just 3 years ago. And the fall has been a bit more severe among 18-34-year-olds, two-thirds (67%) of whom expressed loyalty to their pay-TV service in 2015 (versus 58% now).

Another issue is the reason why people are keeping their pay-TV service. Among respondents ages 18-64, the top reason doesn’t have to do with the content or the experience. It’s simply that they’re “used to it.”

That has to be worrying, as inertia isn’t a long-term business plan…

Still, if there’s a bright spot, it’s that 18-34-year-old loyalists are pointing to some aspects of the content and experience more than their older counterparts. For example, they’re 25% more likely than the broader 18-64-year-old average to say that channel-surfing is a reason to keep their pay-TV service. That’s an interesting result in light of other research which has found TV viewers wanting to overhaul TV’s user interface.

Moreover, 18-34-year-old loyalists are 23% more apt to say that live news is a reason for keeping pay-TV and 14% more likely to say that access to live sports is a reason. Live TV has traditionally been a key differentiator for pay-TV, though streaming services have been going after rights to sports content in recent times.

So while pay-TV is benefiting from inertia, it does have its own strengths. 18-34-year-old loyalists are also more motivated by a need to watch the shows they want to watch than their older counterparts.

Youths’ interest in pay-TV programming is important, because people no longer default to live TV as their first source of content. Streaming services are the ones picking up the slack as default viewing sources, and are in many cases winning the content wars, as outlined in MarketingCharts’ State of Traditional TV Viewing study. Given that 55% of the pay-TV population – including 76% of 18-34-year-olds – stack streaming services on top of their pay-TV service, per GfK’s research, inertia might not be a good enough reason to hold on to pay-TV for long…

About the Data: The results are from MRI’s Cord Evolution research and are based on 24,000 in-person, in-home interviews in MRI’s Survey of the American Consumer®, asking about cord intentions.

The State of Traditional TV: Updated With Q1 2020 Data